Skip to content
Search
Close
*** WARNING! This book is for ADULTS only or may be unsuitable for people under 21 years of age due to sexual content, graphic violence, and/or mature themes. Reader discretion is highly advised. If you are easily offended, then this book is not for you and please do not continue. ***

THIS IS THE FIRST BOOK IN THE TAINTED ANGELS SERIES AND IS A STAND ALONE NOVEL WHICH CAN BE READ BY ITSELF.Willa Eden is used to being different. As an angel she shouldn’t have the dark thoughts she has on a regular basis. She is a soul saver for the Empyrean but since hitting her twenty first birthday, Willa knows she’s much more than that. So much more.

And it isn’t until she meets the arrogant and voracious demon, Rax Torres, that Willa finally finds out just how unique she is.

What should be impossible becomes possible and what her body should never crave becomes too formidable to ignore.

Willa’s unique blood can save the demons that are infected with The Virus and are dropping like flies around her – Rax included. All they have to do is taste a drop. But there’s a catch.

Willa’s blood will also kill anyone who is granted even a single drop.

This book contains explicit sexual scenes and strong language. It is recommended for readers age 18+

Paranormal is one of my favorite genre, so I’m super excited when a talented author with romance decided to write my favorite genre. Something different outside the area she used to write. Yes, this is my first experience reading DH Sidebottom.

Willia and Rax born in two different races who compete all time, their name is a little difficult to remember but for simple, we call it angel and demon. They were both hunters who hunted human soul to be brought into their realm of Utopia or Hell. Willia and Rax has met since the first scene and felt a strange connection that never existed in the history of their race. They can be connected in the mind. Rax, hotter than Hell has claimed ownership of Willia from the beginning he could enter her mind. And Willia who is a kickass heroine; trying reject the claim. But the strange connection that continues to grow stronger and… BOOM!! The next thing I know he’s been involved in intrigues, politics and internal conflicts of the demon.

DH Sidebottom has reinvented the urban legend of angels and demons that we already familiar with new name and new details. She also managed to create strong and attractive characters, even though there has not been consistent. Willia and Rax sometimes still behave, think, and talk a little bit different compared to how their trait has been described.

This has complicated story line because it contains a lot of new terms, which, although equipped with a glossary at the front but not clarified the contents section. It made me have to go back and forth between pages glossary and return to the chapter being read, it may be an additional footnote in each page would be helpful. The background of the story and races here still confuse me. Is this similar to the angels and demons from holy bible? Are AllMighty and God called here to do with Jesus who is often mentioned Rax?

Crave told in dual POV and fast paced but wild and less focused, make sure you read with full concentration in order not to lose track of the story. Throughout the story you’re going to be spoiled with action-packed battles supernatural scenes. Connection and chemistry between Willia and Rax are strong and super-hot, but not deep enough and feels an instant. The conflicts in Crave is a blend of sexiness between drama, humor, action paranormal with full of surprised twist.

Paranormal is a complex genre as the author should have more fantasies about the new world she would build, characters and creatures that must be created, complete with background and full of action that complements conflict. With the development of more powerful and deeper setting and background, Crave by DH Sidebottom will be a new promising paranormal series. 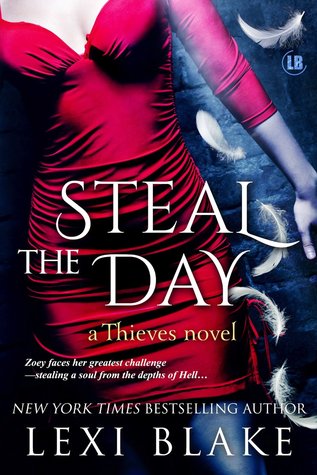 When a member of her crew is dragged to Hell by a demon, Zoey plans the most dangerous heist of her career. With her team at her side, Zoey intends to sneak onto the Hell plane and steal Sarah back.

The job seems impossible until a new client makes them an offer too good to refuse. If she can find an ancient artifact called The Revelation, she can use it to locate an angel who holds Sarah’s redemption in his hands.

Surrounded by warring angels and demons, the greatest threat may come from one of her own. Torn between her Fae lover and the vampire who has always held her heart, Zoey finds that she and Dev are trapped in Daniel’s web of secrets and it may be Zoey who has to pay the ultimate price.

You have to read the first novel, Steal The Light (It’s free download via Kindle/Kobo/?), because this has main plot line with same main characters. I’m addict to Lexi Blake, for real! I read Masters and Mercenaries series at first and got hooked. I know this Thieves series like two years ago but I wasn’t have good feeling about erotica author makes paranormal series. Dear God! I read Steal The Light and can’t stop devour it. I’m warning you!

With Sarah; her witch gone, Zoey determined to bring her back from Hell plane. The new client; duo angel, Felicity and Oliver Day wants to help her with new mission; to bring their brother back. Dev who already part of her team will help her to bring the mission into success. When they’re trying to get Sarah back, there is problem lies ahead from Vampire Council. Double trouble, indeed.

Zoey Wharton Donovan is a kickass heroine and bad girl. She’s the only human female in this series. She has bratty mouth. Zoey (accidentally) got married to Daniel Donovan; her childhood’s sweetheart. Daniel Donovan is a (King) of all vampires, apparently because his blood gen. He’s a geek and comic maniac and sometimes a joker. Despites his happy personality, he can be badass when anyone he loves come to any harm. His vampire personality is very dark and commanding. Damn HOT! Daniel is (basically) a possessive man and never want to share, but for a scheme and he goes along with it. Devinshea Quinn; a human-half fairy prince second line in throne came into Zoey’s world as her lover. Zoey enjoy everything about Dev and the feeling is mutual. Dev feels he found his Goddess in Zoey and decide want to make it last, but not as a lover. Dev wants more than a sidekick lover. Dev is an opposite of Daniel. He pamper and give Zoey everything she wants but Dev wants control in bedroom. He’s naughty and pervert. Rawr! Interesting fact: Dev is decedent of fertility God *wiggles eyebrow*

“Fuck normal, man. Normal will make us all miserable. We make our own normal”

This books is much better than the first I really can’t stop reading their adventure and love life. Besides that, I have some dislikes with this trio. Zoey can be egoist and never think others feel. Daniel can be an ass when his god complex and always distanced himself. Dev always use sex to create distraction. They need to work their asses together as a team, and thank goodness in the end, they really did it. The sex is steamy and hot with normal portion and fine by me but I still lack of chemistry between Zoey-Danny and Zoey-Dev. I hope they will keep build intimacy in the next books. The ending is not what i expected. I hope they can find poor Neil; Zoey’s werewolf-gay husband. He’s the sprinkles in the team.

READ THE SERIES: THIEVES (Click the pic for our review)

hen dealing with demons, the devil’s in the details…

Stealing mystical and arcane artifacts is a dangerous business, especially for a human, but Zoey Wharton is an exceptional thief. The trick to staying alive is having friends in all the wrong places. While having a witch and a werewolf on the payroll helps, being partners with a vampire really opens doors.

Zoey and Daniel were childhood sweethearts until a violent car crash took his life and left her shattered. When Daniel returned from the grave as a vampire, his only interest in Zoey was in keeping her safely apart from the secrets of his dark world. He has vowed to protect her, but his heart seems as cold as the night he calls home.

Five years later, a mysterious new client named Lucas Halfer offers Zoey a fortune to steal the Light of Alhorra. The search for the Light leads Zoey into the arms of an earthbound faery prince. Devinshea Quinn sweeps her off her feet, showing her everything the supernatural world has to offer, but Daniel still calls to her heart.

As the true nature of the Light is revealed, Zoey discovers Halfer is a demon and much more than money is at stake. Per her contract, she must give him the Light or spend an eternity in Hell. What’s a girl to do except fight for her soul…and her heart.

READ THE SERIES: THIEVES (Click the pic for our review)